I recently had one of my paintings from the Préludes… show loaned out to the Völklinger Hütte Urban Art! Biennale 2017, for which I was understandably quite happy, though it would not have been my piece of choice.

When Nicolas Chenus gave me a copy of the thick catalogue from the event though, I must admit to have been very disappointed with the résumé that was written about me. I guess that most critics, journalists, or ex-writers with an axe to grind, still end up making statements based on their own view of the world around, relying on the confidence that they have in their own sense of perception and objectivity.

However, when it comes to certain genres, they fail to recognise their own limits, and are here in total ignorance of the socio-cultural context that is key to my thinking and my work. Just because a painting is called They Used To Do It In The Clubs does not necessarily mean that, “Today, Mode 2’s work points in the opposite direction (to my futuristic figures of the eighties): retrospection, nostalgia. Firmly figurative work shot through with muted colors takes a hazy look back at a golden age. The days of ”Crime Time” – even if they only ever involved smoking a few joints in a club – have passed.” 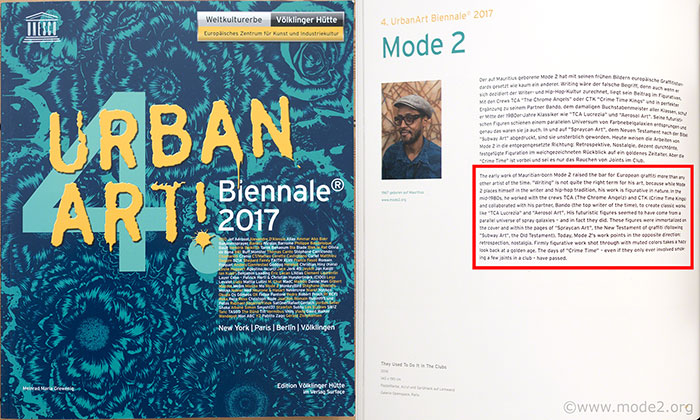 Since smoking has been banned in many clubs, it also brought about the disappearance of joints, spliffs, or whatever some people call them. This in turn brought about a change in the kind of drugs that people would take when they would go out clubbing; for those who feel as if they need to be out of their heads to have a good time.

Music seems to have gone quite a few steps down in the order of priorities, as far as why people choose to go out; as if going out to a restaurant was not so much about the food, but instead how the place looks, who else is going there, or is it somehow an “in” spot where you will be able to show off to the rest of the audience as you sit at your table.

There is all this talk of people getting turned off of clubbing, but given what is motivating them to go out, it is not surprising that the novelty wears off at some point, and it is these particular factors that I try to touch on with my work; looking forwards as opposed to looking back. There is no point losing any time on nostalgia, as that is all in the past; but there are lessons to be learned from changing times, when we’re trying to redefine a more wholesome future. I guess that the author of the piece does not have a vision or understanding of going out and partying that goes out this far; but that should not give him the right to impose his own narrowness of mind on what he (or she) sees around him (or her). Maybe they should have read what I said about my photos in the piece I wrote about the Préludes… show of November 2016.

When such misrepresentation has become the norm, you find yourself having to run twice as fast and twice as much as what is going on around you in order to somehow repair the damage that they have done to the wider public’s reading and understanding of your work.

Whatever happened to curiosity and an open mind that doesn’t make assumptions based on prejudice? Who knows? Everybody’s an expert these days. This is why it is so important to talk directly to the public, whether on shows, or this blog; even if it seems that very few would would give up the time to read my blogs all the way through; or go on to read the interviews in the links. I may use a lot of words, but I do not say anything for no reason. It’s a complex enough world out there, and it’s not with short sentences that we will make any sense of it all.

I don’t consider myself as having a massive on-line presence, and maybe I should try to post more regularly here, instead of spending time on other social media; but I guess that the only thing I can do to counter the misrepresentation that we have seen with this “Urban Art Biennale”, is to tell my own story, on a platform where the public will eventually come across the truth; as opposed to lazy and biased journalism…