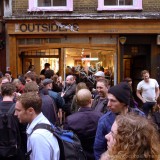 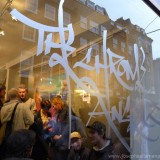 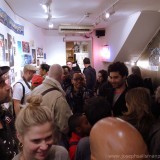 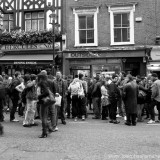 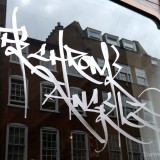 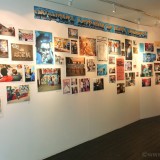 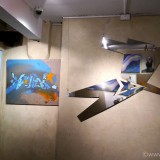 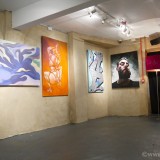 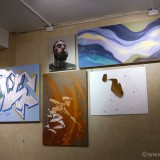 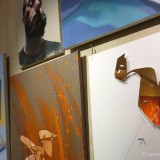 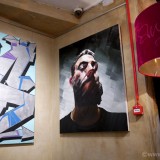 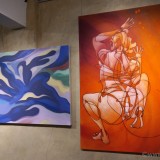 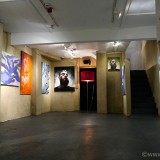 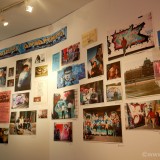 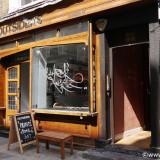 A big “thank you” to all those who managed to show up and get in, last Thursday evening. The Outsiders gallery is indeed not a very big space for such a show, and it was just as hard to squeeze the crowd in there, as it was trying to get all of our work onto the walls.

In the end we had to democratically settle for three pieces per artist, so, with regards to my part, that was only half of what I had. I myself didn’t even get a chance to see what else Zaki, Pride, and Scribla had produced for the show; though I knew that there would only be three pieces from Bando.

Many of you seemed to have really enjoyed the “historical” section upstairs, which got me thinking  that we must get back in touch with Andrea Caputo (All City Writers), and get a TCA book out at some point. Given all the fake-ass publications, reference books, and coffee table books that we’ve had these last years; he’s the only guy that I would trust for such an endeavour.

With regards to the new work that was on show, I myself wanted to introduce some of you (for those that didn’t yet know) to the “one-liners” that I have been playing about with, for the last three years or so. The principle in itself is quite straightforward; an image or a lettering made up of one continuous line, but it’s the significance behind this that I’m trying to get at.

Whether it be a dance move, an MC freestyling, a melody or programmed beat sequence, a tag, a character, a throw-up, or a full colour piece; the backbone to it all would be that one continuous thread binding it all together as one, from beginning to end.

This line, this time-line, this flow of moves or progression of beats, is what we recognise within the culture as being the one common denominator that holds us together, where we can, upon seeing or hearing, feel whether somebody is on-beat, whether somebody or something has flavour; whether or not it has soul.

Though we have always strived to remain open-minded and progressive, with regards to what influences us, as well as trying to stay ahead of what is going on around us in the world; we can still recognise that deep down there, beneath and behind, there is that rhythmic and dynamic pulse of some writer, dancer, Mcee, Dj or musician who’s giving us goose-bumps, whenever he or she does his or her thing.

This, in my opinion, is one of the main elements that differentiates us from all other cultural trends, fads, movements, and revolutions that took place in the 20th century; ours being probably the very last one. Our blueprint gave us the wherewithal to sample just about anything that all other cultures had offered us up until that point; but sampling back then (unless something was a blatant tribute to its forgotten originator) was only half of the story.

Whether you decide to redefine the letters of the alphabet in your own way, break down some well-known or obscure tunes and restructure them in the studio or on the turntables, flip anything from Capoeira and its origins to the Russian Red Army Ballet into a new dance move, or even decide to take all the music you heard and make the music with your mouth (Biz); we took it all, flipped it and remixed it!

Art critics, buyers, and all those journalists and sociologists writing and talking on our behalf don’t know what they’re on about, but, as they don’t want their audience to see that they’re blatantly out of their depth, they use their words, writings and opinions to dictate who’s hot and who’s not within our culture; denaturing the natural and organic evolution that we should have taken, while conveniently forgetting the instigators, innovators, and originators who brought new notions of rhythm, sound, shape and dynamics to art and culture, full stop.

Every now and again we hear that one of these pioneers has passed on; Rammellzee, Kase 2, and Stay High 149 in the last year alone. Their voices, their knowledge, and their living memory and definition of what this is all about gone forever, while those that don’t know keep on talking and writing and dictating…

Speaking of which, we should not even begin talking about the record industry, the biggest pimp of the 20th century, which absorbed and perverted the vocal and musical aspect to all the various cultures that came to the fore during those hundred-odd years. Rap? Please… That word or name or definition used to have a meaning for us during our youth; but in this day and age….? The record industry, along with a lot of short-sighted, selfish and foolish MC’s made it a lot harder for many of us to be able to pick out what still feels good; and after having to listen to a lot of people just spouting whatever negative sensationalist shit that sells, I just stop searching, and rely on thicker-skinned friends of mine to guide me to what still makes me feel good inside.

Funny how back in the days we would be getting off on “Techno Scratch” by Knights of The Turntables, alongside “It’s Yours” by T La Rock & Jazzy Jay, “Fresh, Wild, Fly, and Bold” by the Cold Crush Brothers, or “Summer” by the Fantasy 3, back to back; but it was all music to us, however diverse. And, strangely enough, we were perhaps more open to diverse influences then, than we are today. We wanted each next tune to be as different as possible from the previous; and that’s what felt exciting, inspiring, and ultimately enlightening and empowering.

You know what, though? Some of us thrive off of being receptive that way, as opposed to boxing ourselves in. The strength and richness of The Chrome Angelz as a crew was the sum of these very different individuals who managed to put their egos to the side, and thrive off of their collective diversity. I’m still vibing off of ’84-’85 today, but I don’t live back then; because back then we were definitely living for the future, and, no matter what’s going on with the world today, the position of opposition that we had then, is what still drives many of us on right now…

15 Responses to The Chrome Angelz preview